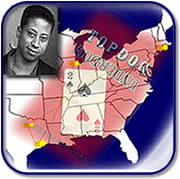 The curtain came down for the final time marking 156 performances of Topdog/Underdog for Alley resident company members David Rainey and K. Todd Freeman. The two actors took their last bows on Sunday, May 9th at Hartford Stage in Connecticut. For Rainey and Freeman, the journey of working on Suzan-Lori Parks’ Pulitzer Prize winning drama began at Steppenwolf Theatre as a co-production with the Alley Theatre.

After performances in Chicago, the tour took Rainey and Freeman back to Houston and then through Dallas and Hartford. David Rainey was gracious enough to grant Theatreport an interview via e-mail a few days before closing the show. And what follows is a reflection on the challenges and experiences he had with the tour…
Read More... | 1 comment