Rice Players to perform THE ALTRUISTS by Nicky Silver 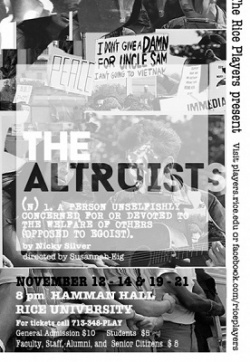 "THE ALTRUISTS revolves around a dedicated, if disorganized and demented, group of young radicals. These are the kids who protest. They protest arts funding and arms funding. They protest school cutbacks and AIDS cutbacks and welfare cutbacks. They march for gay rights and children's rights and Women Against Drunk Drivers. But their morality is put to the test one day when Sydney, a shallow, anorexic soap-opera actress, fires a gun into the hulking body of her sleeping boyfriend. Terrified, she looks to her brother, Ronald, the center of this merry band of radicals, for help. Ronald, a social worker, wants to aid his sister,
but at the moment he's consumed with love...
Read More... | Comments?

Landscape of the Body at UH - theatre - studio

Landscape of the Body

Lone Star College-North Harris fine arts drama department is once again producing a full-scale musical to be showcased for six days in October. This fallâ€™s offering is the rock musical, â€œRENT.â€

This Tony Award winning production with music and lyrics by Jonathan Larson is based on Pucciniâ€™s opera â€œLa BohÃ¨me.â€ The plot involves an assemblage of impoverished young artists and musicians struggling to survive and create in New Yorkâ€™s Lower East Side.
Read More... | 1 comment

The Importance of Being Earnest at UH

The Importance of Being Earnest

Even as â€œIdeal Husbandâ€ and â€œThe Importance of Being Earnestâ€ were being celebrated on stage every night, during the day Oscar Wilde was being attacked in the courtrooms of England. Using trial transcripts,
Read More... | 1 comment