Indie and Fringe Theatre in Houston. Expect the unexpected.

Bobbindoctrin invites you to the 6th Annual Puppet Festival 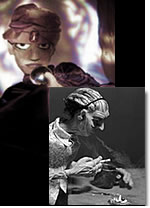 In their ongoing effort to introduce artists and audiences alike to the most daring contemporary puppetry for adults, Bobbindoctrin is proud to present its Sixth Annual Puppet Festival! This year, Bobbindoctrin company members and local artists will present new live works of puppetry, along with short films from national and international puppetry artists, distributed by Heather Henson's Handmade Puppet Dreams...
Read More... | 1 comment

BooTown announces its eleventh installment of the Grown-up Storytime series!

Tonight at 10pm @ Rudyards
Here's how it works: You send us your stories, we choose the most awesomest, and then we hand them over to the readers. They can read it, chop it, add to it, sing it, act it, screw it, play it. You might hear your story.
Read More... | 1 comment

A skeptical convenience store clerk is forever changed after an encounter with an elderly lady customer who remembers her past lives and is convinced that she can manipulate the hands of fate to make her next life exactly the life she has yearned for .

This 25 minute, original piece is part of the 'Houston Fringe Festival' hosted by TheatreLab and Frenetic Theatre.
The ticket cost is $10 for 1/2 evening (1 1/2 hours) and $16 for an entire evening. THe festival runs August 15-31 at Frenetic Theatre, 5102 Navigation.


March 14th and 15th -
Strand Theatre -Galveston
Houston, Tx-Rot won ‘Best Original Show’ in The Houston Press in 2007 when the two companies collaborated on its premier in 2007. Now, for all of you unfortunate souls who missed it the first time, we are doing a remount of the production for our “Rotten to the Core” tour, beginning at Diverseworks January 17, 18 and 19, 2008, and traveling to other Texas Cities in February and March, such as Rude Mechanicals in Austin, and The Strand Theatre in Galveston..
Read More... | 5 comments