Becky Shaw follows a newlywed couple who fixes up two romantically challenged friends: wife's best friend, meet husband's sexy and strange new co-worker. When an evening calculated to bring happiness takes a dark turn, crisis and comedy ensue in this wickedly funny play that asks what we owe the people we love and the strangers who land on our doorstep.
Becky Shaw won the 2009 Outer Critics Circle Award, and was a finalist for the 2009 Pulitzer Prize for Drama, and the Lucille Lortel Award and Drama Desk Award for Outstanding Play. Gina Gionfriddo was a finalist for the 2013 Pulitzer Prize for Drama for another play-"Rapture, Blister, Burn".

“Firecracker has allowed me to work on shows that really delve into the fragility of human relationships, which I love in a script.” McMillan says. “Becky Shaw is no different; it is a darkly funny and realistic exploration of how our actions can have unintended consequences in each others lives.” 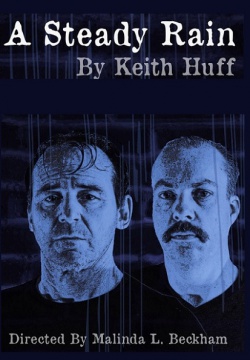 Dirt Dogs Theatre Co presents A Steady Rain by Keith Huff. Directed by Malinda L. Beckham.
Friends since kindergarten, Chicago cops Joey and Denny are almost family. Their relationship is put on the line after responding to a domestic disturbance call that takes a turn for the worse.

The result is a harrowing journey into a moral grey area where trust and loyalty struggle for survival against a sobering backdrop of criminal lowlifes.
Read More... | Comments?

TEN WAYS ON A GUN @ The Landing Theatre Company 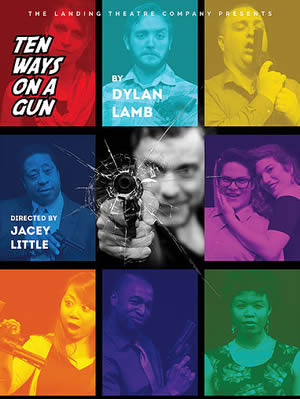 Ten Ways on a Gun
by Dylan Lamb
Based on The Ballad of Tommy Freely conceived by Jessica Person & The Soul Motion Architects
June 23-July 9, 2016

Tommy Freely, a troubled Brooklynite, buys a gun (online) in an attempt to regain control over his life; but before he can get that sweet, sweet release his girlfriend FREAKS. Desperate, Tommy opts to “timeshare” the gun with his deadbeat coworkers at his dead-end telemarketing job. The result? Tragically hilarious calamity...
Read More... | Comments?

A play that xplores the possibilities and limits of love in uncertain times, will have its World Premiere on March 25 at the Midtown Arts and Theater Center Houston – MATCH.

Produced by Dirt Dogs Theatre Co. and directed by Malinda L. Beckham, The Boundary is the story of a successful romance writer who has settled into a comfortable marriage with her sturdy husband. But her world gets knocked off its axis when a former lover – an anti-government radical wanted by the FBI – suddenly reappears and asks for her help in what will be his boldest and likely final act.
Read More... | Comments? 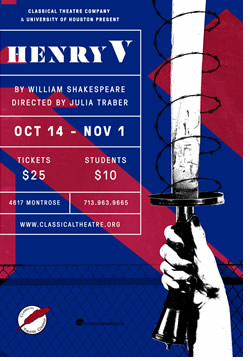 After a season-long hiatus from The Bard, Classical Theatre Company (CTC) brings Shakespeare to life on its stage once more. “We are thrilled to be producing Shakespeare again. We’re a company whose mission is to produce the classics, and Shakespeare is the granddaddy of all classical drama,” says CTC Executive Artistic Director John Johnston. “We are partnering with the University of Houston School of Theatre and Dance on this production, and will be using several of their outstanding undergraduate students in our cast.”
Read More... | 1 comment 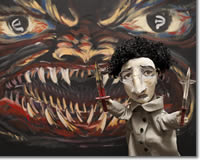 Bobbindoctrin reveals the truth that other liberal arts institutions continue to evade: WE ARE IMMERSED IN AN INVISIBLE WAR WITH DEMONIC FORCES BENT ON ENSLAVING MANKIND.
In a post-apocalyptic wasteland,during man's final battles with Satanic forces, a roving band of puppeteers recreates the inspirational story of the lapsed Jew who changed the world and aided the arrival of the End Times...
Read More... | 1 comment
◄ Prev (1) 2 Next ►